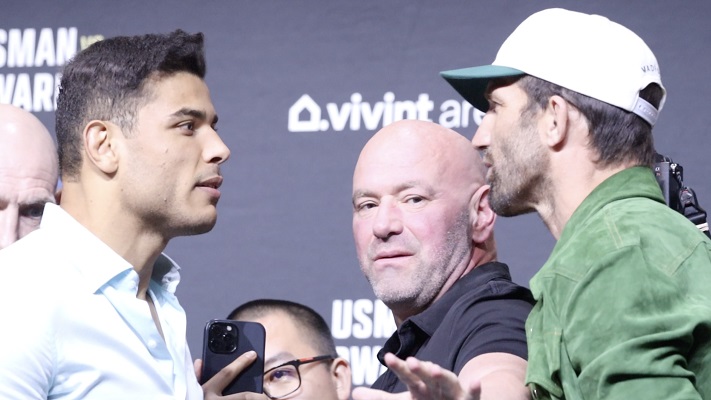 UFC 278 is quickly approaching, and the co-main event players were arguably the most vocal in their pre-fight press conference on Thursday.

While Kamaru Usman and Leon Edwards return in the main event of the PPV card, former middleweight champion Luke Lockhold and one-time title challenger Paul Costa stand out in a shared feature. There was no love lost between the pair in Salt Lake City on Thursday, with the pair bickering over topics including clothes, age and weight.

When asked about returning from a multi-year absence, Rockhold (16-5) exclaimed that things felt “getting better” as the fight loomed. “Honestly, it feels so fucking good. It feels right.”

Despite Costa’s black belt in Brazilian Jiu-Jitsu, Rockhold also didn’t hesitate to predict that he “would be treated like a dog if Paul lands”.

“This bastard didn’t want a fight in the first place. The UFC got it down his throat and he delayed it twice,” Lockhold later told the media and fans in attendance at the Vivint Arena, alluding to the Brazilian allegedly doing some cosmetic surgery. “Month after month, all the cosmetic crap you do, you little bitch. Shut up.”

When asked by a reporter if he was surprised by the energy Rockhold brought, Costa noted that “energy doesn’t matter on the day of the fight.”

Costa has referenced Rockhold’s age and outfit more than once, suggesting the former champion is dressing to look younger. The former champion is 37 and Costa himself is 31. Rockhold, in turn, questioned Costa’s ability to gain weight. The last time the Brazilian played, he forced his fight against Marvin Vittori to bump all the way from middleweight to light heavyweight.

The Brazilian’s response wasn’t what he wanted: just another “fuck you”.

In the intense stares at the press conference on Thursday that followed, Dana White could be heard telling Costa that the Brazilian “scared me” when he came to power. White will definitely keep his arm between the two — but there will be no difference between Paul Costa and Luke Rockhold in Saturday’s UFC 278 co-main event.