Pat Downey Wants on Bellator’s Dublin Card, Has a Name in Mind 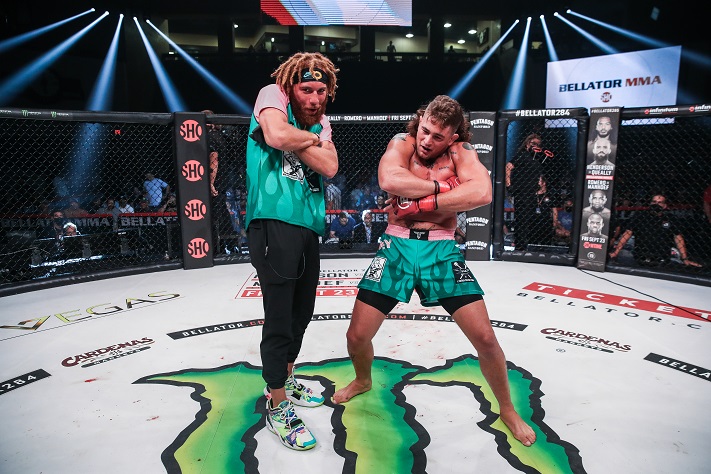 Wrestling standout Pat Downey got the job done on Friday at Bellator 284 for his first win as a mixed martial artist.

In an interview with media including Cageside Press after the Sandowd Pentagon fight in Sioux Falls, South Dakota, Downey admitted to having “some butterflies,” adding: “I’m not going to lie, I can’t wait to get it done. I Just want to have this 1-0 record and say I’m a mixed martial artist.”

He can now speak officially. Downey held Keith Nelson with a triangle arm early in the first round, using his wrestling to finish the fight.

Downey added that he doesn’t want to be a wrestler who can overwhelm his opponent with one move. “I don’t want to be one of those guys that isn’t exciting. I want to do cool kills like you see, slam to full ride transition to kill. If I’m not trying to kill him with chokes or knuckles , I just want to beat him to shit.”

Downey’s debut came in the same week as Bonicare’s Contenders series, and the two wrestling rivals will no doubt be compared. Downey believes their paths will cross again. Currently, he is focusing on the rapid transformation of Bellator MMA.

“I want to go to that Bellator card in Ireland and beat people. I love this,” he shouted.

Downey told Cageside Press that he had a name in mind. “I want that bastard who was talking nonsense in the last fight, Danny Compton. He’s in my DM again, saying how the fuck do I get a weaker opponent than my first op. Mind you , this guy beat the first action Bellator tried to feed me. So I see a lot of assholes like this on Instagram, my DMs, or social media. Be careful what you ask for, because you might get it.”