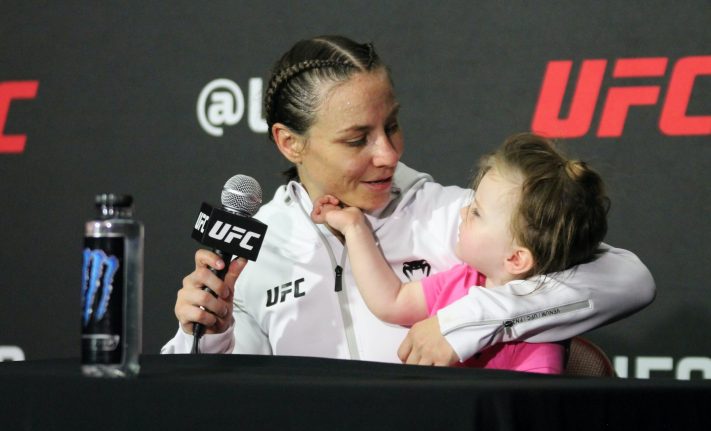 In interviews with the Cageside Press and other outlets, Nunes sat on the interview table with her daughter on her lap.

“It’s been a heavy day for the past few months. Amanda (Nunez) rematching, opening a new venue, moving house, having a 2-year-old. So it’s just a lot. The kind that Amanda lost after a long time Emotions, I just want her to make sure of that while trying to coach her and then train at the same time,” Nunes said.

“I’ve always wanted to have more kids. I want them to be closer together. I’m not going to do that comeback again because it’s horrible, so I’m going to stop and do a couple in a row.”

Nunes has been a professional mixed martial artist since 2010. After 12 years of her career, she started thinking about ending and decided to do so after Saturday night’s game.

“After my fight with McKenzie (Dunn), my next fight is going to be a retirement fight. I’m going to fight Amanda Lemos and I end up with kidney stones and I’m 15 (The scarecrow). It’s not healthy for me to be 15. At 25 (flyweight) I feel my best and I just want one,” Nunes said.

“Having two careers at the highest level in the same family is really tough. I do want to help the future and the next girl, so that’s what I’m going to focus on right now.”

Her fight against Calvillo was scheduled for July 9, but a stomach problem kept Nunes out of the fight. The UFC decided to move the fight to Saturday night.

“The day after that fight, I had a plan to retire. So I was like come on, I can’t even retire in peace? I have something in every fight, I can’t even retire in peace , this is ridiculous. I told Amanda ‘one more thing’ you know? I had a lot of cramps this morning and I thought ‘Are you serious? Is this really happening now? But you know what… I’m not that excited about this fight,” Nunes said.

“I just wanted to win so I could take Raegan (Nunes) out there and have a photo with her.”

Watch the entire postgame media brawl with Nina Nunes above.