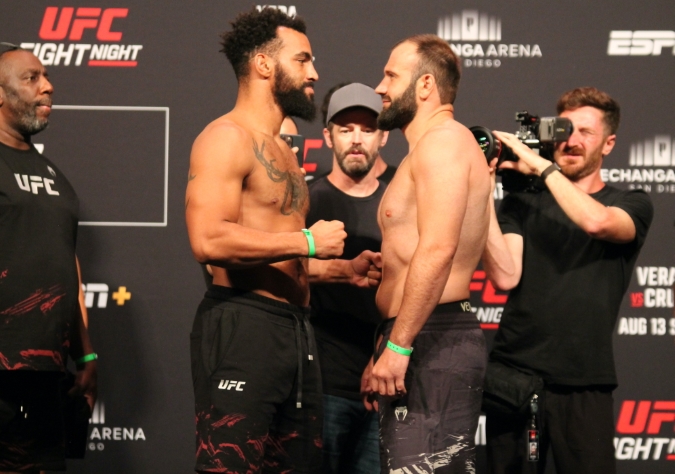 Clark, who had been successful against William Knight at one level, fell back to his more natural weight class when facing off against Russia’s Murzakanov.

90 seconds into the opening round, Murzakanov sneaked his left hand through Clark’s defender. This hurt Clark, who continued to circle and stay outside when Murzakanov put pressure on him. Clark fired a side kick, then also attacked the front leg. In the last minute, Clark kicked Murzakanov in the head. The Russian survived and tied things up immediately, although he couldn’t quell the fight.

Early in the second quarter, Murzakanov got his hands on, hurting Clark, then tying things up in a questionable moment of decision-making. Moments later, he attacked again, tearing his body apart. Clark fought back; Murzakanov punched and locked his body in place. The Russians fired several shots into Clark’s thigh, and Clark struggled with his hands, trying to free himself. Moments later, Murzakanov hurt Clark again, causing him to stumble. Murzakanov pounced and landed hard, but Clark was able to tie things up and survive.

In the third quarter, Murzakanov packed up. He left Clark injured to take care of another body shot, after which Clark fell like a sack of potatoes. Murzakanov poured down with more ground n’ pounds as Clark camouflaged and tried to move. He couldn’t escape and referee Frank Trigg called.