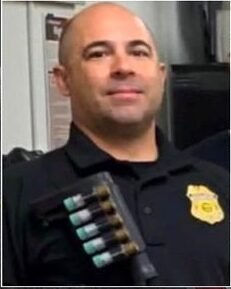 We are devastated to inform you of the death of Marine Interdiction Agent Michel O. Maceda of the United States Department of Homeland Security, Customs and Border Protection, and Air and Marine Operations, U.S. Government. He passed away on Thursday, November 17, 2022.

He and two other marine interdiction agents intercepted a vessel they believed to be transporting narcotics. One of the occupants of the vessel opened fire on the agents as they began to board it. All three agents and both subjects were shot during the ensuing shootout.

The United States Coast Guard flew all three agents to a hospital in Puerto Rico, where Agent Maceda later succumbed to his wounds. One of the two smugglers on the boat was also killed.

More than 1,300 kilograms of cocaine were found on the boat the agents were trying to get on and another boat that was stopped nearby.