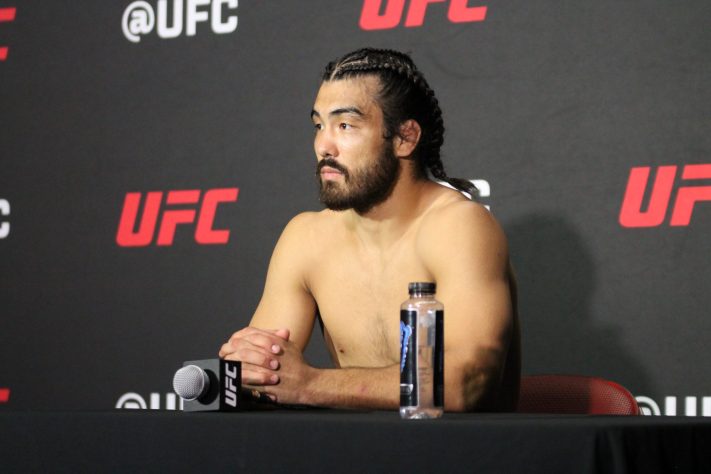 SAN DIEGO, Calif. — UFC welterweight Josh Quinlan had to wait another week, but he finally made his UFC debut, beating Jason Witt at UFC San Diego on Saturday night.

“It feels great and it’s satisfying to know the hard work I put in to get this result, but like my coach and I said before the game, we’re not defined by trophies or results. We Defined by work ethic, attitude and behavior. I’m glad I got to go in there with bravery,” Quinlan told the Cageside Press and other media during the postgame brawl.

“I’m going to keep working every day, doing my best, and taking on the next challenge.”

Quinlan (6-0) went down with a left hook on a counterattack from Witt. Witt was clearly out from that shot and Quinlan lunged at him, but pulled his fist back when he saw the referee come in.

“I pounced on him. I was going to hit him a few more times, but I saw he was a little softer and the referee called out. I’m glad I was able to maintain that restraint, but maybe not all the time, you know? We Going there to finish our opponent. He’s going there to finish me, so I want to make sure the job is done before anything happens.”

Quinlan was supposed to compete in last week’s UFC APEX bout led by Thiago Santos and Jamahal Hill, but the bout was pushed to UFC San Diego after testing positive.

“When the fight went down last week, I have to admit I wasn’t calm about it. I wasn’t collected. I was a little bit emotional because I thought the opportunity was being taken away again. I was able to calm down. Me and my coach we Training to be your best, this is an opportunity to be your best,” he said.

“When it feels like an opportunity is being taken away, it’s…you know I had to change my mindset. I had to think about it differently. I was able to pick myself up and give it to God.”

Watch the entire postgame media spat with Josh Quinlan above.