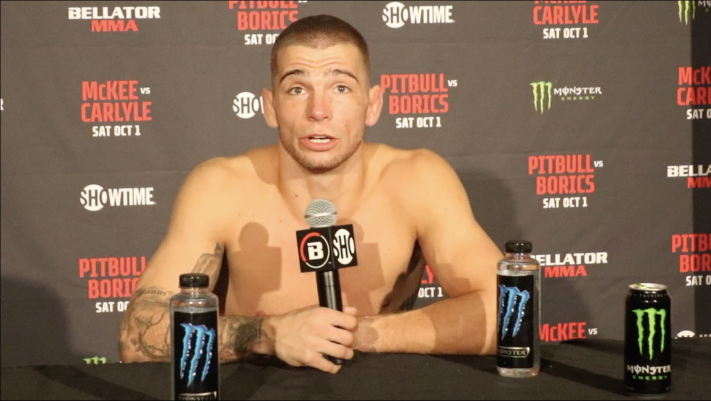 LONG BEACH, Calif. — Bellato lightweight Jeremy Kennedy won the biggest win of his career Saturday night at the Bellato 286, but it wasn’t how anyone thought he would win.

Kennedy (18-3) was declared the winner because his opponent Aaron Pico suffered a shoulder injury during the game. Between rounds, Pico’s corner desperately tried to bounce his shoulder back into place, but the doctor came in to look at the injured fighter. After a few minutes of examination and talking to Pico, the doctor was unable to advise him to continue.

“I was just focused on finishing the first round. I could see this round going and it was getting easier and easier for the mat to come back. He was less and less resistant. So I thought maybe something happened. I don’t know,” Kennedy told the Cageside Press and other outlets during the postgame brawl.

“Between rounds, I didn’t really pay attention to him. My coach was right in my ear, grab my head, listen, that’s what we’re going to do. Then I looked back and I saw them Like a reef on his arm. I was like, dammit, maybe this isn’t going to pass.”

For a split second, Pico’s horns appeared to be able to put his shoulders back in place, but then doctors said he had fractured his collarbone. Kennedy wasn’t involved in the conversation, so he didn’t know the fight was about to begin.

“I was looking forward to a fight. When I got off the stool, I was totally looking forward to the second round. Unfortunately, to be honest. You can’t control anything with your shoulders in particular, you see these injuries all the time,” he said. Say.

Aside from the way the fight ended, Kennedy said he felt good about Pico in the cage.

“I felt good there though. I felt the power and I wish it could go more. Especially the first round. I’m usually a bit of a slow starter. When I got up for the second round, I was like itching. I was like I was going to lose my temper with this guy,” Kennedy said.

So, now over Pico on his resume, Kennedy looks ahead to where the 30-year-old featherweight will go next.

“I’m now looking at what’s coming next. I got a round in 10 months, so I want to stay active. It’s my biggest thing, activity. The only thing I can see announced is the February card,” he said. Say.

Kennedy had a name ready.

“I have a lot of connections with Pedro (Carvalho). So this is the one I’m looking for. Pedro might be sitting there shaking in Ireland wishing he hadn’t sent those tweets but that’s what it is and now he That has to be supported,” Kennedy said.

Kennedy has names and places. All that’s left is Carvalho to take it.