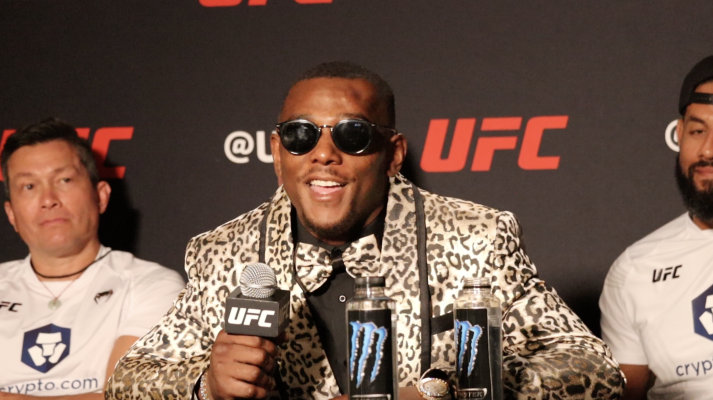 LAS VEGAS, Nevada — Jamahal Hill (11-1, 1NC) in his post-fight news after beating Thiago Silva in the main event at UFC Vegas 59 on Saturday His entire team was called at the meeting.

The reason, he told the media, including the Cageside Press, was that potential opponents would have to face not just him but his team. “I’m proud of my team standing behind me, they believe in me, stay calm, don’t get too nervous when I might be in a fire or something, keep their instructions, keep everything in order. You’re here to face these Guys, like you faced me when you walked in there.”

“That’s who you’re going to face. You need to see scary faces,” Hill continued. “I’m not the only one. The face of terror is my whole team. People always say, ‘I want to know where he trains, I want to know where he is, should he move here? “You see them, you should be afraid to see me know I’m not too far behind, do you feel me?”

In terms of his overall performance, Hill’s fourth-round win over Santos via TKO — on a night with a 100 percent completion rate between ten games — was happy for Hill, though he knew there was room for improvement. Still, “I felt like I had to show something,” he said. “I’m happy that I won, I’m happy that I can represent what I’ve been through. I can say I’m strong, I’ve been this and that all day, but I have to prove it today.”

Hill believed from the start that Santos would rely on his wrestling, and he did. In the stand-up comedy department, “he timed some good shots,” Hill admitted. “But apart from a couple, nothing really hit the ground, too flat. Nothing hurts me more than, ‘Oh my god, I need to—’. Nothing. Did I step back?” See what I’m talking about?”