Kirsty*, a mother of one, was violently attacked by her seven-year-old son Adam* after the school run one icy December afternoon in 2012. She tried vainly to hold him off as kicks and punches rained down.

“I begged him to stop,” Kirsty says, “but he was strong and the blows continued.” “I was black and blue by the time he calmed down after a half-hour.” He had the appearance of a rogue animal.”

Unfortunately, this was not a one-time occurrence. Adam had repeatedly attacked Kirsty and her husband Mike* since they had adopted him seven months before – and her story is far from unique.

Fabulous can exclusively reveal that the number of parents who have experienced violent or aggressive behavior directed toward them by an adopted child is at an all-time high: 65%. 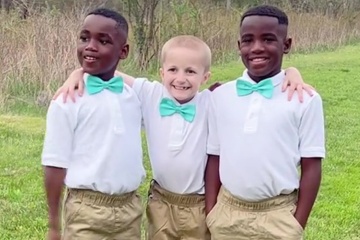 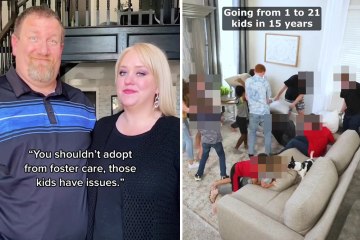 “Family relationships are sacred, so it’s shocking and upsetting when there’s violence within them.” However, the stigma must be removed because it is extremely isolating for all.”

In November 2021, Domestic Abuse Commissioner Nicole Jacobs used her first report to call for more help for parents suffering from CPV, in addition to the alarming new findings from Adoption UK.

Meanwhile, a survey conducted by the charity Parental Education Growth Support (PEGS) in November of last year revealed that four out of ten adoptive parents are physically assaulted at least once a week, with seven out of ten being verbally abused on a daily basis.

More than half of adoptive parents reported their child’s misbehavior to the police.

According to Adoption UK statistics, around 3% of all adoptions fail, so dramatic acts like Adam’s can be a tipping point for emotionally exhausted parents.

Kirsty, 48, had no idea what she and Mike, 54, were getting themselves into.

“After being unable to conceive naturally, we decided to adopt in 2012.” “We yearned for a child and the opportunity to raise a loving family,” she says.

“In June 2012, seven-year-old Adam arrived from a foster family after a two-year process that was incredibly stressful.”

Despite the fact that they had never met Adam before, they were aware that he had a troubled past and that he was in desperate need of a loving family.

“His biological mother drank heavily during her pregnancy, and he was hospitalized as a baby with various injuries.” “He was taken into care when he was three years old and had lived in several foster homes before coming to us,” Kirsty says.

“We were ecstatic, but Adam was terrified, and the violence began two days later when he pinched my arms.” He was squeezing me tightly around the neck and punching me for no reason within two weeks,” she recalls.

“I was taken aback because we hadn’t been warned about his violent behavior, and I assumed I’d done something wrong.” It was all directed at me because I was his primary caregiver, spending every day at home with him.

“I hoped it would pass,” Kirsty continues, “and we tried to teach him it was wrong by using calm reasoning, but he seemed to have no control over it.” “We knew he was to blame, but that didn’t make it any less difficult.”

The Child Psychology Service’s Dr. Amber Elliott explains how a child’s early years can have a significant impact on their future behavior.

After failing to conceive naturally, we adopted in 2012. We yearned for a child and the opportunity to raise a family.

“The brain creates our relationship templates in early childhood or while we are still in the womb,” she explains. “For some abused children, the pain, humiliation, and cruelty they endure become second nature.”

The adventure was just getting started for Kirsty and Mike.

“It was a living hell for the first nine months. “We had a stranger in our house committing domestic violence, and I wondered if we could go on and if our marriage would survive,” Kirsty says. “Mike and I had a lot of disagreements because he thought I was too sensitive.

“I went to our social worker, who told me it would all work out in the end.” Basic play therapy was offered to us, but I didn’t think it was enough. I then went to the adoption director and begged for more assistance, but no one seemed to care.”

Adam was a student at the local elementary school, where his antics were just as disruptive.

“He’d injure kids in the playground, and I’d have to apologize to their parents all of the time.” I was frequently summoned to see his teachers, with the other mothers tutting as I walked the shame walk.

“I tried to explain that it was because of his past trauma, but I felt so judged – especially because he was the only child who wasn’t invited to any of the kids’ parties.”

Due to oversubscription, three-quarters of adoptive parents, according to Adoption UK, are unable to obtain support such as psychological therapy or medical assessments. As a result, approximately 40% of children experience severe mental health problems.

Due to their difficulties, adopted children are twice as likely to drop out of school and later find work.

The government admits that a new £48 million National Adoption Strategy, which was launched in July 2021 to support England’s 31 regional adoption agencies (RAAs), is insufficient.

Kirsty hit rock bottom in mid-December 2012 when her urgent requests for assistance from the local government were stalled due to lengthy waiting lists.

“Adam was enraged because PE had been cancelled at school, and he kicked me all the way home,” she said.

The first nine months were a total nightmare. We had a stranger in our home who was committing domestic violence, and I was unsure if we could go on or if our marriage would survive.

“He was crazy,” Kirsty said, “punching and scratching me until I bled.” She managed to flee and locked herself in the bathroom. “After 15 minutes of kicking at the door, he was exhausted.

“It was the worst feeling I’d ever had – the boy I loved was beating me up.” He never mentioned hurting me again after that, which is common in CPV. He was constantly inquiring about my bruises.”

Kirsty was diagnosed with post-adoption depression in January 2013 and was prescribed medication by her GP.

She explains, “I went from being a confident, happy woman to barely leaving the house.”

She staged a sit-in at the local council the following month, still desperate for help. “Until they agreed to help, I refused to move.”

The strategy worked, and Adam began receiving sensory therapy, which aids in the regulation of emotions in children, within weeks.

“Because he didn’t realize his own power, he learned to be gentler.” In a matter of weeks, he began expressing his rage by kicking or throwing things at me rather than hurting me. We had shattered televisions, phones, and derogatory language, but there was far less physical violence.”

Though the next two years were difficult, a breakthrough came in 2016, when NHS funding of £3,500 was used to pay for health assessments.

Adam was diagnosed with ADHD, reactive attachment disorder, sensory processing disorder, social and communication disorder, and foetal alcohol spectrum disorder (FASD) at the age of eleven, all of which were caused by his birth mother’s drinking during pregnancy.

“Getting names for these things was a relief, and it meant we could learn how to help him.” “Kisty says that knowing Adam’s brain is wired differently helped him own it.”

Kirsty says her son, now 18, is a completely different person as a result of his continued progress.

“He’s a charming, caring young man with a lot of promise.” “He’ll punch a wall or throw things only a few times a year now,” Kirsty says.

It was the worst feeling I’d ever had – here was the boy I adore slapping me in the face. He never mentioned hurting me again after that, which is common in CPV. He was constantly inquiring about my bruises.

“He’s in college studying carpentry, and it warms my heart when he tells me he loves me, which he never did before.”

Ellie*, who has two adopted children, Isabel*, 12, and Kyle*, nine, is another mother who has suffered from CPV.

Ellie explains, “Both of them were exposed to drugs, alcohol, and violence while in the womb and as babies.”

After four unsuccessful rounds of IVF, she and her husband Craig* adopted Isabel, who was two at the time.

“At first, Isabel settled in well, but she was a feisty young lady. “At bedtimes, she became violent, hitting and kicking us,” she says. Isabel’s erratic behavior worsened after they adopted Kyle, who was two at the time.

“She couldn’t handle change and would kick off on a regular basis, which irritated Kyle.” He screamed for the first year he lived with us. ‘What have we done?’ I would wonder at times.

Ellie, 48, and Craig, 46, barely made it over the next few years. “We had to separate them all the time and deal with their violent outbursts.” It had a significant impact on our bond. It took months to get any kind of help and to get specialist appointments.”

When Kyle was three, their local authority provided him with theraplay, a structured form of play therapy, and attachment-building therapy. “He started talking about his feelings and got a lot better,” Ellie says.

However, Isabel’s aggression increased after she was diagnosed with FASD, ADHD, and autism in 2017.

“I’d get hit or punched while getting her ready for school, and she’d scream all the time,” Ellie says. “However, it was pointless to chastise her.” Instead, I’d make an attempt to exit the room.”

As she grew older, Isabel began to express deep regret. “After hitting me, she’d be devastated, and her self-esteem would be in shambles,” Ellie says.

“She was well aware that what she was doing was wrong, but she couldn’t help herself.” ‘Mummy, if I didn’t, I’d hit someone,’ she’d say when I asked why she bit or scratched her arms with scissors at school.

Isabel got along fine at first, but she was a whirlwind of activity. She was also hitting and kicking us at bedtime.

Ellie had taken a heavy toll. “I had to leave my beloved job in leisure management, and I’ve been dealing with severe anxiety and stress as a result.” Even in my darkest moments, however, I’ve always thought to myself, ‘Come on, we signed up for this.’ ‘We’re a unit.’

“Everything went to hell and back. Being cooped up inside was too much for Isabel. “She’d hit and bite me during homeschooling,” Ellie remembers.

When the lockdown ended and school reopened, Isabel was able to receive face-to-face Child and Adolescent Mental Health Services (CAMHS) support once more, and her violence decreased.

“Isabel is calmer now,” Ellie says, “but we’re still trying to move her to a specialist school because her current teachers are unable to meet her needs.” She’s a lovely girl beneath it all, and she deserves the best in life.”

Alison believes that educational opportunities for traumatized children should be enhanced. “Across children’s services, the legacy of ten years of austerity cuts has been heartbreaking.

“We need to train all educational professionals in attachment and trauma, in addition to more help for parents.”

“The majority of families find adoption to be extremely rewarding, but we must ensure that everyone receives the appropriate support.”

Ellie agrees that her ordeal was worthwhile despite the pain. “Adopting a child can be difficult, but we have no regrets, and our children have brought us a lot of love and joy,” she says.

“I only wish there was more awareness of CPV, as well as support for parents who are experiencing difficulties.”

Visit AdoptionUK.org and TheChildPsychologyService.co.uk for more information on adoption in the United Kingdom.