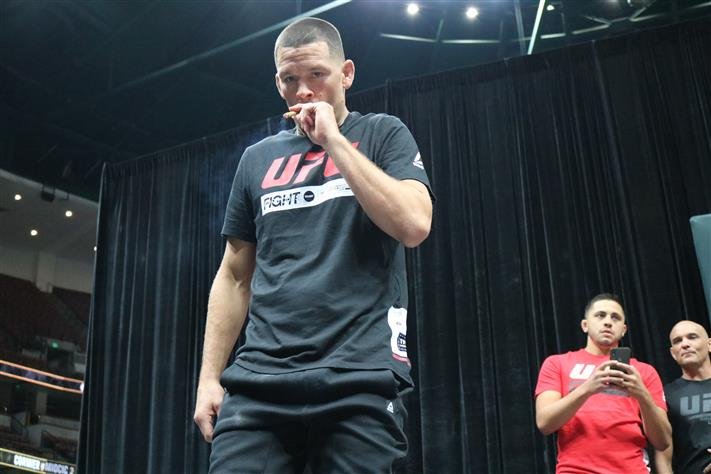 When a USDA sample collector showed up on his pad recently, Nate Diaz’s reaction was the most likely Nate Diaz way. Meanwhile, Sean Strickland doesn’t appear to be falling out of love with retiring former UFC and Strikeforce champion Luke Rockhold. And more – here’s your Sunday MMA crash!

Fury FC Fighter has the craziest post-fight interview ever

Bowman, a veteran of the LFA and Bellator MMA, is the same fighter who announced in previous postgame interviews that he has herpes, so insanity is just the norm on the court. This time, Bowman called himself an “influencer of influencers” and claimed Jimmy Kimmel was a pedophile.

Of course, there’s a good chance that Bowman is just talking frantically about making headlines, in which case it appears to be working.

The ONE Championship kicked off with Amazon Prime Video on Friday, as former welterweight champion Zebaztian Kadestam KO’d the ball rolling with a perfect uppercut.

USADA raising the bar for marijuana is a good thing, because Nate Diaz did smoke a blunt weapon while making the USADA sample collector wait for more urine recently.

In a video documenting the visit, Diaz initially said the collector needed two more liters, but unless he was filling a soda bottle, he probably meant milliliters.

The Stockton native, who will be making headlines next month at UFC 279 against Khamzat Chimaev, streamed the fight live on Instagram and immediately capped and spread on social media.

“This guy won’t leave my house because I’m not giving him enough pee,” Diaz says at one point in the video. “I’ve done my best to be pissed off my n*****. How many liters do I have to do? I still have two liters of pee to give him. He won’t get out of here until—. DK is my guy, But USADA can suck. Come back in six hours and I’ll give you two more liters. Sorry, DK.”

Luke Rockhold retired after a three-round decision loss to Paul Costa at UFC 278, and current middleweight contender Sean Strickland is happy to see him go.

“I’m really glad he’s retired, man,” Strickland told Shimo in a recent interview. “You don’t meet a guy who meets Luke Rockhold and says, ‘Man, this is a tough guy. I want to hang out with him. Luke Rockhold is the definition of a nervous c*nt, and I’m glad I didn’t have to hear his name or meet him in the MMA community.”

Strickland has denied Rockhold a chance at Costa, suggesting he won the UFC middleweight title in an “easy” time. Although he didn’t completely discredit Rockhold’s abilities.

Bolacina has surgery, hopes to return in January

Speaking of Paul Costa, the UFC 278 middleweight underwent hand surgery after his win over Rockhold. As a result he will be put on hold for a while, but he is considering a return in January.

“I broke my hand in the fight,” Costa said in a video posted on his YouTube channel (with English subtitles). “I thought I had a bone injury or a ligament, but what really happened was a metacarpal fracture. I hope it wasn’t a fracture because then I can start fighting again in 50 or 60 days and use all the conditioning I’ve done and the whole training camp [re: UFC 278]. “

The “Magic” had a short but very entertaining fight at BKFC 28 on Saturday, another highlight to watch.