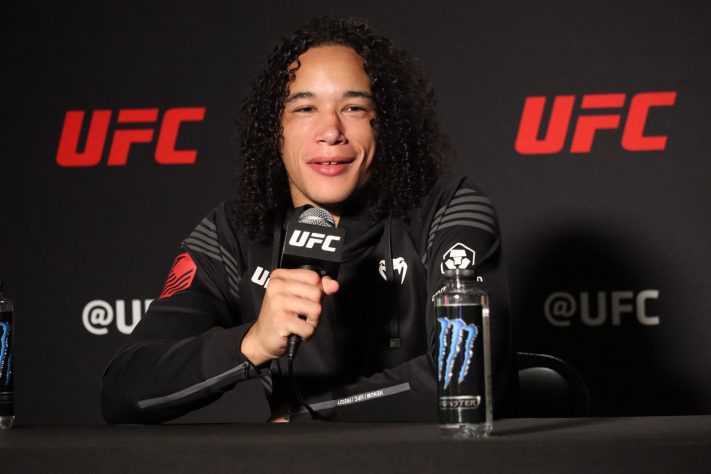 LAS VEGAS, Nevada — Sometimes, calling someone out can go wrong. But in an interesting way.

Brian Battelle’s most important victory in the UFC came on Saturday when he headed Takashi Sato brutally with 44 seconds to go at UFC Las Vegas 59 on Saturday.

Battle’s elimination of Sato was his first fight in the UFC and his third win in the promotion round.

After his vicious knockout, Bart turned on the mic during his in-cage interview and called out Ian Gary and Brian Barberena. In an interview with Michael Bisping, Butt said one of the reasons he was called Barberena was because of the way he spelled his name.

“If I can’t find Ian Gary, there’s another guy in this department called Brian-Brian Barberena. I had to watch him take out one of my heroes [Robbie Lawler] a few weeks ago. I don’t think the division is big enough for two Brians,” Bart said. “Not to mention, your name is misspelled, dog. I don’t like the way you spell your names. It’s Bryan’s Y. “

Well, if you might have noticed, Battle screwed up because Barberena spelled his name the same way, and he replied to Battle on Twitter shortly after the call.

😂😂 Nice try but we spell the same name 😂😂. Nice win, though keep trying. 👍🏽 @BrendanFitzTV Thank you for correcting ✊🏽 #UFCVgas59

Back in the media room for a post-war interview, Bart admitted he screwed up and laughed it off in reply to the tweet.

“I know! Oops. I screwed up,” Bart told Cageside Press. “They told me that as soon as I got backstage, I was like ‘God! I’m an idiot! Damn!'”

“I can’t even say anything. You know, I mean like? No response. I screwed up. Yeah. Fair play.”

As for his other calls, Battle just thinks Garry’s name is hot right now, even though he’s not that impressive in the eyes of the TUF champion.

“So, with Ian Gary, I look at him, you know, what I’m talking about, he’s hot right now. He’s got a lot of influence, a lot of people are following him. He should be the next Conama Greg, you know, I just watched him fight and I wasn’t that impressed,” Battle said. “It’s probably the most high-profile match I can get in terms of someone who isn’t ranked. So, I mean, I’m not the only one who wants to fight that guy.”

Watch the rest of Bryan Battle’s post-fight interview at UFC Vegas 59 above.