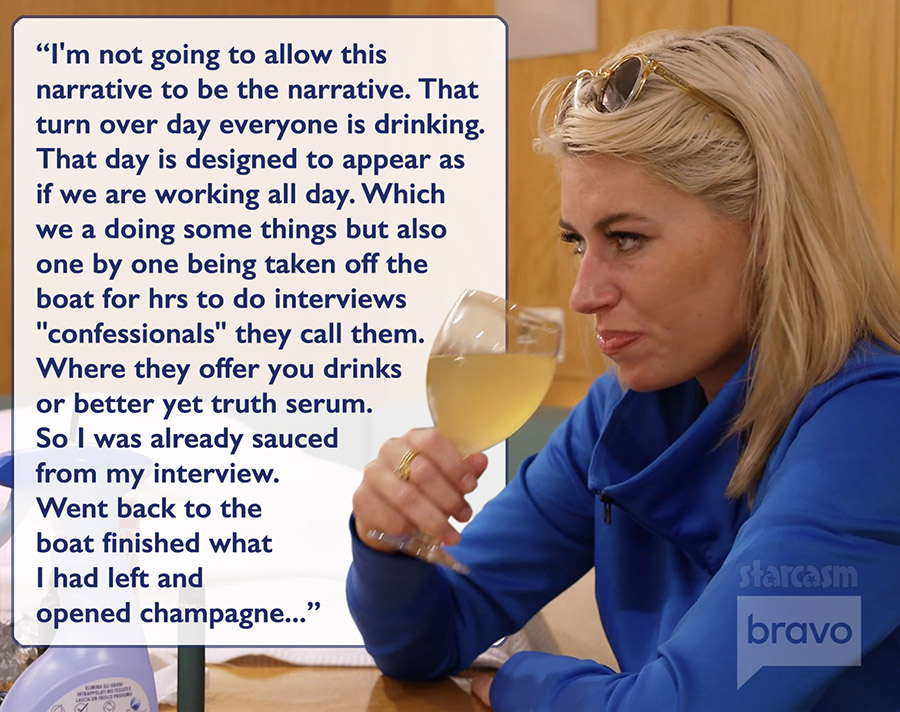 This was the final straw for Fraser, as he met with Captain Sandy Hahn and let her know that he wanted Camille to go. Captain Sandy supports (even praises) Fraser’s decision, and at the end of the episode we see Captain Sandy let Camille know she was fired.

However, Camille said on social media after the episode aired that things didn’t quite turn out the way they were shown on screen.

“I’m not going to let this narrative be a narrative,” Camille posted in a lengthy statement in multiple parts to her Instagram Story. She went on to note that the crew was between two charters during the so-called handover day.

“Everyone was drinking that day. It was about making it look like we were working all day.” Camille admitted that the crew was “doing something,” but added that over the course of the day, they were taken one by one. Go, record a confession for the show.

Camille claimed in her post that the cast were given drinks (or “truth serums”) before and during their confessional interviews. “So I’ve got my fill from the interview,” she explains. “Go back to the boat, drink what’s left of me, and open the champagne.”

In the episode, viewers see Camille pop open a bottle of Veuve Clicquot.

More from Camille on Champagne:

Fraser said when we were done, he said we could have “champagne time.” So I opened the champagne that Fraser was using at the cue session. Since he used it for us to drink, I assumed that was what we used. I’m not a champagne snob so I don’t know what it’s worth.

During the show, Fraser criticized Camille in his own confession for drinking at work. “Seeing Camille come out with a small glass of champagne means she really doesn’t care and doesn’t want to do the job.”

Chef Rachel Hargrove also weighed in on Camille’s bash when she spoke with Fraser on board on handover day. “She’s been drinking all day. If you’re gonna get the fuck done, at least get your shit done!” she said.

Later in the episode, Fraser “caught” Camille hanging out with the deck crew on the pier, and he confronted her with pictures of some unfinished interior cabins.

“Did I miss something in the cabin, yes,” admitted Camille in her Instagram post. “I could have been more thorough in my drunken state, yes. Mind you, Hailey was also in charge of the cabin, but I took all the blame. When some of these photos were of rooms I didn’t do…”

Camille also claims she was hung up on the dock with the deck crew at the behest of a showrunner. “While I was on the pier, a producer asked me to go on the pier and talk to Katie about our crew’s night,” Camille explained. “Then Fraser told me to leave work early. Not saying it was a scam, but it felt like it was.”

Regardless of how it feels, Camille agrees with Fraser and Captain Sandy’s decision to fire her:

People will say I’m making excuses. Regardless it’s my experience. I’m not saying I shouldn’t be let go. I think it’s time to go. There won’t be any resolution unless one of us goes and it happens to be me. I agree. I’ve had enough anyway.

Here’s the rest of Camille’s statement:

And this whole lazy thing. I’m not lazy.. maybe not that enthusiastic. They chose not to show any snippets of my work when I was doing that 90% of the time. Have you ever heard of clothes being stained? No, because I always have clean underwear and uniforms for my team members. I get work done in the laundry room. This is my main responsibility.

I forgot a few things here and there. I don’t stock the fridge at all. I put the glass in the trash can. I swam before my guests got to the beach, but my hair was dry by the time they showed up?

Yes, I just wouldn’t accept and advocate that statement. What I have achieved so far in life is not the achievement of a lazy man. I will continue to take responsibility for my actions without shame, because at the end of the day, I will grow from them, learn from them, and from these lessons and failures, I will be one step closer to success.

Simultaneously, below deck The number of fans who support Camille and support Alissa are fairly even. Most of the people on #TeamCamille are like her in that they are willing to admit she could have done something different – even better – but they insist that Alissa is the real instigator who has been on Camille since charter season disrespect.

I’m pretty confident the Camille vs Alissa debate will be the number one topic of the conference below deck Season 10 Reunion! (Assuming both women participate.)